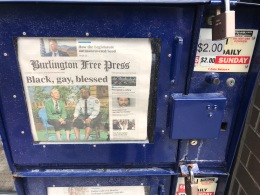 I have interned at the Burlington Free Press (USA Today/Gannett), The Addison Independent, JazzTimes magazine and One Perfect Shot (FilmSchoolRejects.com). I have also freelanced for the Washington Post, contributed to the New York Times On Campus blog, and written for Times Higher Education, HuffPost, and The Writer. My worked at the Free Press has been republished by the Associated Press and USA Today, its parent paper.

I am currently the editor in chief of The Middlebury Campus, the student paper at Middlebury College. I previously served as managing editor and news editor.

Below you can find examples of enterprise stories, breaking news stories, beats I have covered, and a five part video series I hosted, shot and edited.

If you are unable to access an article due to a pay wall, please email me: willdigravio@gmail.com.

2. James O’Keefe spams community with invitations to lecture – The Campus

3. Why two Middlebury football players kneel during the anthem – The Campus

The Washington Post (I was hired as a freelancer for this article.)
Seven Americans on patriotism, protest and the president (co-byline)

On March 2, 2017, students at Middlebury College protested a lecture by Charles Murray. The protests and their aftermath gained national headlines, and continue to be one of the most commonly cited examples of demonstrations on colleges campuses in recent years. At the time of the protest, I was the news editor of the student newspaper, and thus helped lead coverage and wrote many of the pieces myself. A timeline of my reporting can be found here. Included in the timeline is my live stream of the protest, which went viral, my reporting for the newspaper, and reflections I wrote for the New York Times and HuffPost.