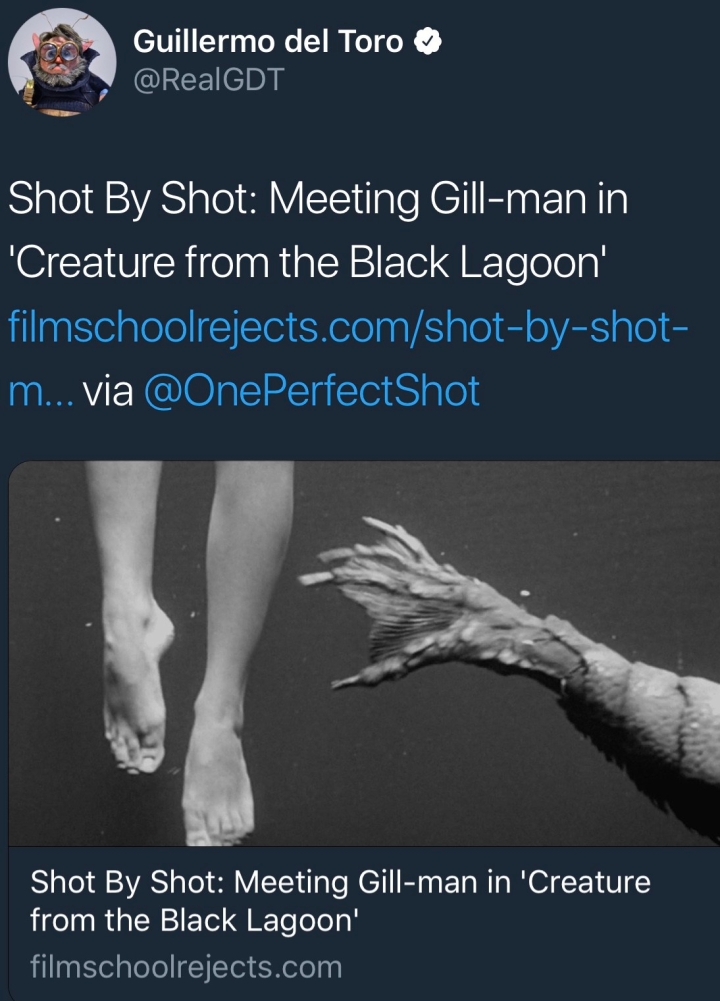 I wrote my second “Shot By Shot” piece for Film School Rejects/One Perfect Shot this month: An examination of the “underwater stalking” sequence from Creature from the Black Lagoon,  when Gill-man observes Kay as she swims in the lagoon.

After the article posted, this happened:

Super cool. Super happy. And super grateful to write for a website that publishes 1,500+ word analyses of films.

Speaking of being super grateful to write for FSR, this next article is probably the coolest thing I’ve ever been a part of. A reader about to turn 19 reached out and asked for 19 movie recommendations from 1999 (her birth year). So, the FSR staff compiled a list. My pick: Harold Ramis’ classic, Analyze This.

The only other thing I wrote for FSR in June was this video essay guide to the work of Paul Thomas Anderson.

My internship with FSR/One Perfect Shot has come to an end, however, I have been asked to stay on and continuing writing! I’m super honored and excited to continue to write for a website that does so much good for film.

Part of the reason I wrote less for FSR is because this month I began working at the Burlington Free Press, a daily newspaper based in Burlington, Vermont, and part of the USA Today Network. I am spending the summer as a staff reporter, covering trending topics and whatever may come across the news desk on a given day.

I wrote twenty articles in the twenty days I worked in June. Some of my favorites include:

I am a member of the Media & Minorities Research Lab at Middlebury College. As part of that project, we run a blog. Here is my first post, on research I co-conducted in January on portrayals of survivals of sexual assault. It compares two different era: 14 months before and after news broke of the Clinton-Lewinsky Scandal, and 14 months before and after the Donald Trump Access Hollywood tape was released. Check out the post to see what we found. There’s a lot more to be researched on this subject.

A few of the “Perfect Shots” I chose for One Perfect Shot. (Twitter: @oneperfectshot)